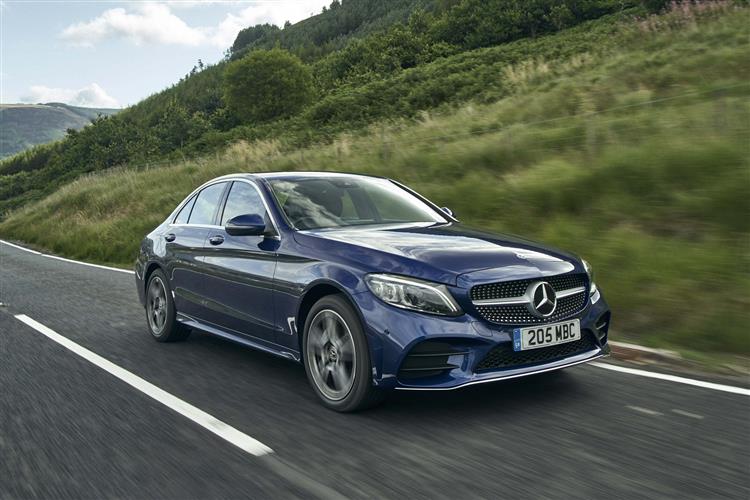 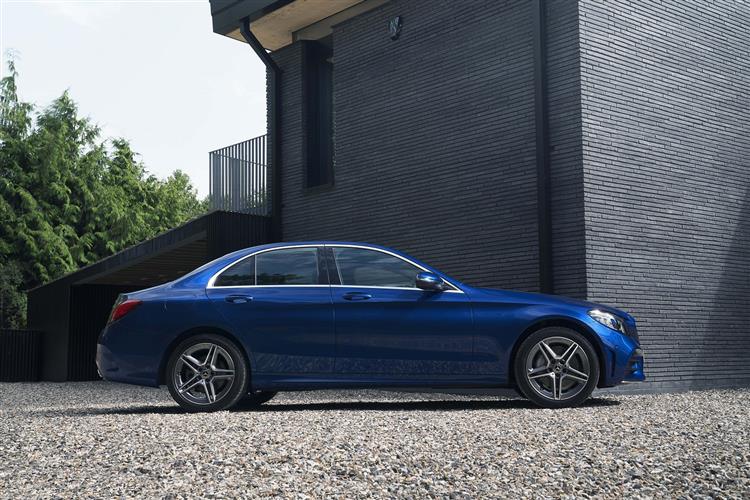 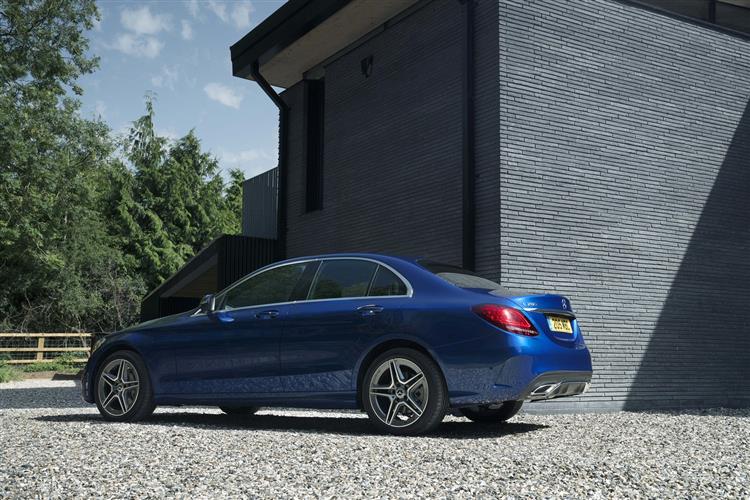 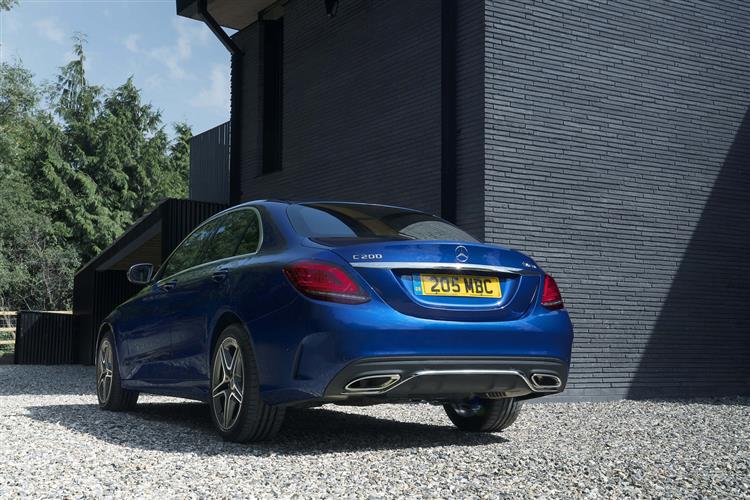 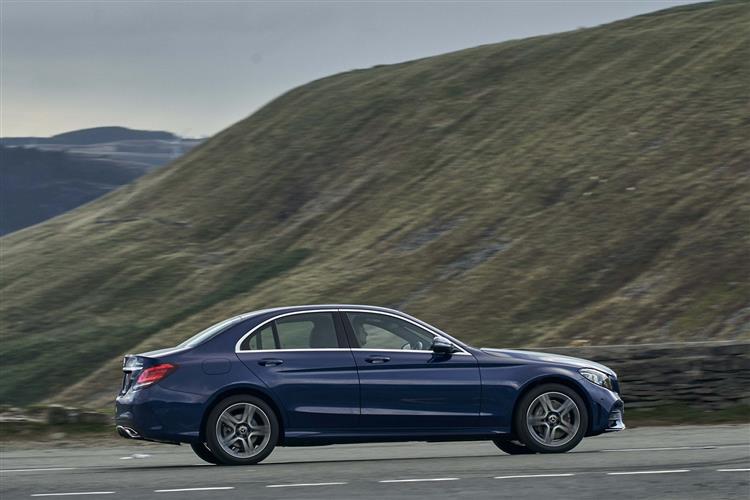 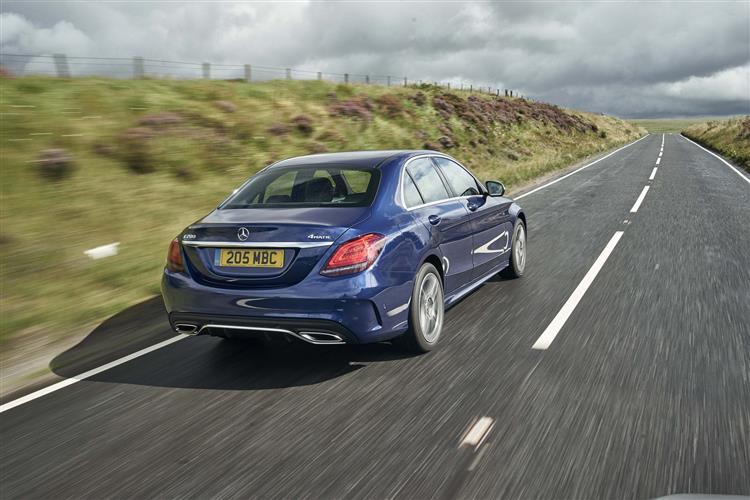 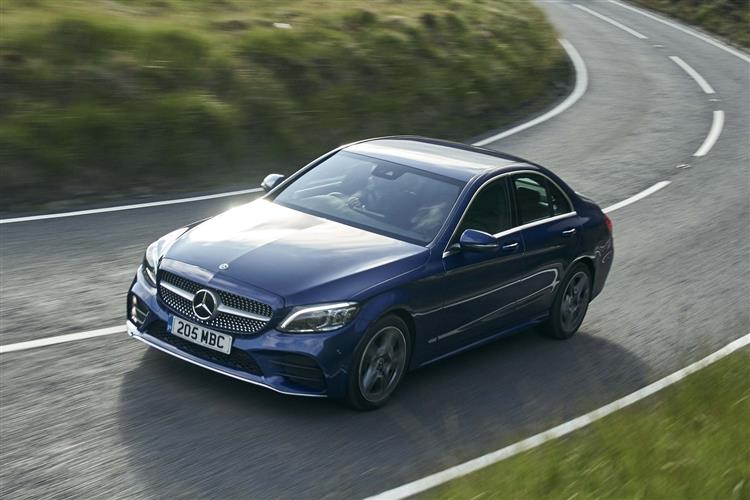 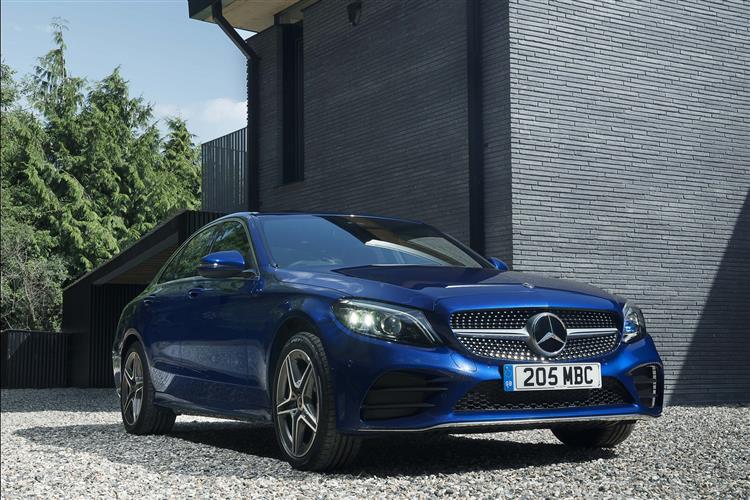 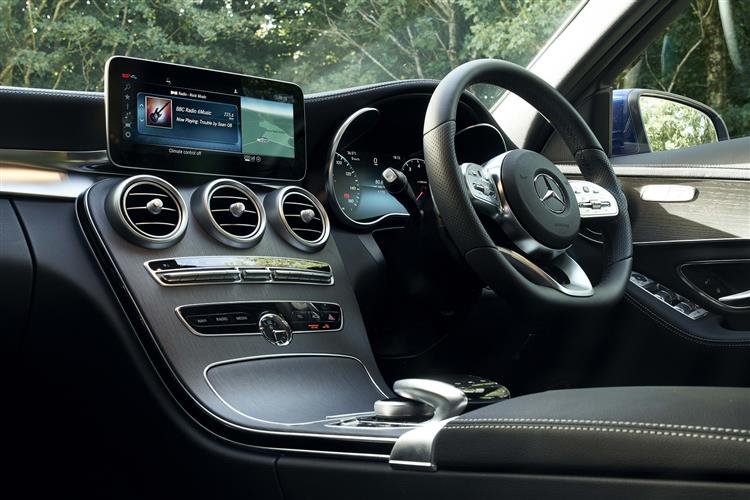 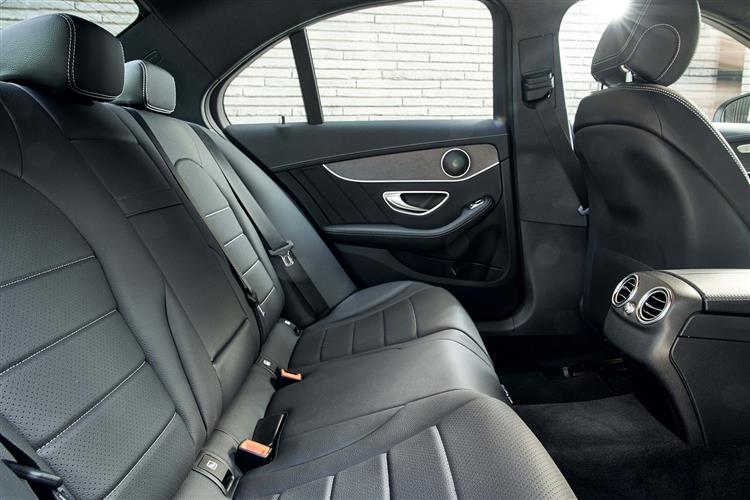 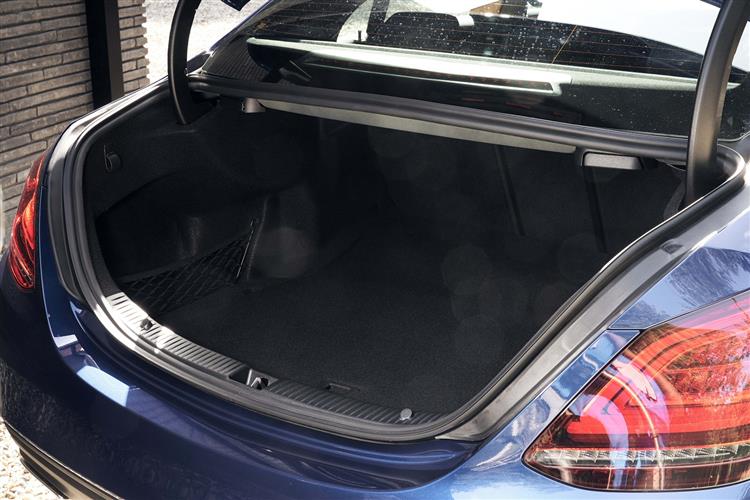 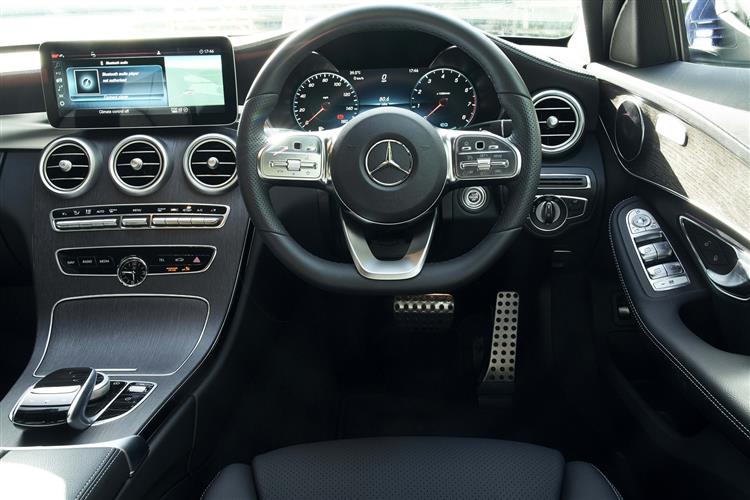 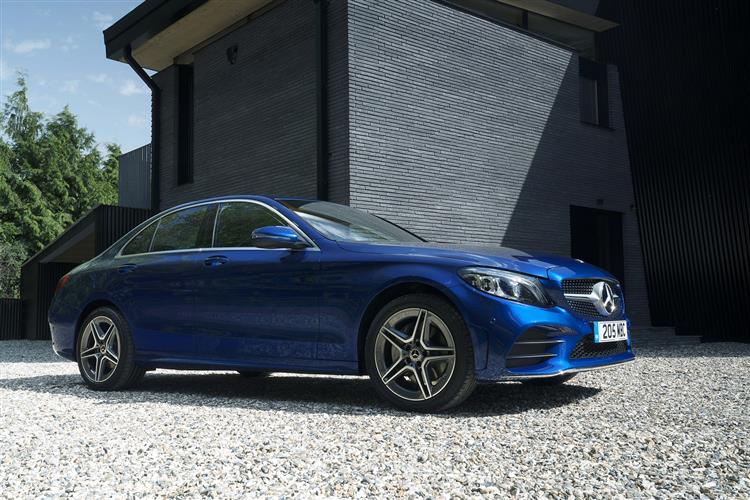 This improved Mercedes-Benz C-Class Coupe is better placed than ever before to put one over on its domestic rivals. Jonathan Crouch reports.

For some time, BMW and Audi had the mid-sized executive coupe sector to themselves; BMW with the 3 Series Coupe model that became the 4 Series Coupe: Audi with its A5. Mercedes introduced a C-Class Coupe model in 2011 to try and face up to these competitors, but it didn't make much headway. Only with the introduction of the second generation C-Class Coupe in 2015 was the Three-Pointed Star finally able to take on its Teutonic rivals at their own game. Here was a car that handled considerably more sharply than its four-door C-Class showroom stablemate. In fact, it was a good match against an equivalent 4 Series or A5 Coupe model. The only fly in the ointment were the carry-over base petrol and diesel engines that most customers had to be content with. If Mercedes could produce something better in this area, you felt, then it really would have a very complete contender on its hands. Well, with this revised second generation C-Class Coupe design, that's just what the Stuttgart brand has brought us.

When we first tested the original version of this second generation C-Class coupe, we were particularly impressed by its surprisingly sharp handling dynamics. This attribute continues with the revised range but here, perhaps the most important news is the introduction of fresh mainstream petrol and diesel engines beneath the bonnet. The range kicks off with the 156hp 1.6-litre petrol engine used in the base C180, but ideally, you'd begin your perusal of the line-up with a more modern unit, the 1.5-litre 184hp petrol unit fitted to the base C200, a model available in rear-driven or 4MATIC form. This powerplant features clever 'EQ Boost' technology which uses a 48volt on-board network with a belt-driven starter/alternator. There's also a 258hp 2.0-litre petrol variant, the C300. Many C-Class Cabriolet customers still want a diesel, usually the 2.0-litre 194hp powerplant fitted to the C220d variant, which can be had in rear-driven or 4MATIC form. There's also a C300d variant with the same engine tuned out to 245hp. At the top of the range lie the fearsome Mercedes-AMG models, offered with V6 or V8 power. The V6-engined C 43 4MATIC now puts out 390hp, 23hp more than before. That's enough to take a C 43 Coupe from rest to 62mph in just 4.7s. Beyond that lies only the V8 C63 S AMG model, with a 4.0-litre V8 Biturbo engine offering 510hp.

The styling of this revised second generation C-class Coupe isn't much different, a revised front bumper slotting under the smart diamond radiator grille which is flanked by standard-fit LED High Performance headlights. As before, a high beltline and frameless doors with free-standing exterior mirrors aim to underscore the sporty character. One particular highlight is the long drawn-out dropping line typical of a coupe. In contrast to the C-Class Saloon, the dropping line extends further past the rear wheel arch. To underscore the Coupe's sporty disposition, the suspension is 15 millimetres lower than that of the Saloon. Inside, the cabin gets the option of the fully-digital instrument display, a 12.3-inch TFT screen that replaces the conventional dials using technology borrowed from larger Mercedes models. You can customise the layout between three display styles - 'Classic', 'Sport' and 'Progressive'. As before, flowing forms characterise the centre console as well as the door and rear side panelling, which smoothly merge into one another to emphasise the coupe character. There are front sports seats specifically designed for this Coupe variant and featuring automatic belt feeders for added convenience. The choice of materials and the finish have a hand-crafted feel with high-class appeal and aim to deliver a fresh take on modern luxury.

Expect pricing to be much as before, which means that most models will be sold in the £37,000 to £40,000 bracket. There's just one trim level - 'AMG Line' - before you get to the top Mercedes-AMG variants. Intelligent 'MULTIBEAM LED' headlights that adjust to road conditions are now optional. As with all modern Mercedes vehicles, buyers will be attracted by solid build quality and a certain familiarity with the look and feel of the cabin. This coupe sees many of the features that previously only appeared on £50k+ models filtering down to more affordable versions. One example of this is the air conditioning system that uses satellite navigation to detect tunnels. Having identified one, it closes the air recirculation flap automatically when you enter the tunnel to prevent bad smells from filtering into the cabin, then opens it again when you exit. This revised model features the option of Mercedes' latest 'level 2' autonomous driving technology, with improved camera and radar systems that allow it to see up to 500m ahead. You'll need the optional 'Driving Assistance Package' for that, which features the brand's 'Active Distance Control DISTRONIC' active cruise control system which can draw on navigational data to predictively adjust your speed. Other new developments include intuitively understandable 'Active Lane Change Assist' and 'Active Emergency Stop Assist' as new functions of the existing 'Active Steering Assist' set-up. Plus the capability of the standard Active Brake Assist autonomous braking system has been extended to mitigate the consequences of rear-end collisions with slow-moving, stopping or stationary vehicles.

The only area where this second generation C-Class Coupe really needed improvement was when it came to the most affordable petrol and diesel engines. Now that these have been brought up to date, this car looks a very complete package indeed. No luxury brand - come to think of it, no other brand of any kind - offers a wider choice when it comes to coupe motoring than Mercedes-Benz. This C-Class Coupe may be the marque's most affordable offering when it comes to this kind of car, but it still feels of very high quality indeed. But that you would expect. What might be more of a surprise is just how satisfying a driver's machine this model can be, especially in its more powerful forms thanks to clever suspension and a hi-tech range of engines. The top C 63 AMG variant is a potential BMW M4-beater and even more affordable versions - the volume diesel derivatives for example - can be remarkably rewarding on the right road, even if the sporty AMG add-ons do slightly affect running costs. You could argue that many potential Mercedes buyers won't especially value this car's surprisingly dynamic repertoire - and you might be right. Important though, we think, for the Stuttgart brand to show that it was capable of providing it. If that was the intention, then the job's been done well.

END_OF_DOCUMENT_TOKEN_TO_BE_REPLACED

"When I started looking to get a new (personal) lease car I contacted a number of leasing companies. Silverstone were by far the most responsive and helpful. They were able to order exactly the model of car I wanted at an excellent price. Every aspect of their service from setting up the lease contract to overseeing the delivery of the car was exemplary. They were attentive and responsive but never 'pushy'. Thouroughly recommended. A big thank you to all the Silverstone team, especially Holly who dealt with all my enquiries quickly and efficiently."

"Superb service. After having been really let down by another leasing company, Silverstone saved the day. Really professional, quick and pleasant staff. Clear communication and quality service from start to finish. I was so pleased with the service I leased another car from them! Thanks especially to Aby, who was a superstar. I leased a Tesla Model 3 (and now a Fiat 500 too!)"

"I cannot fault the service received from Silverstone Fleet Management, for Start to finish it was seamless. I was regularly kept in the loop with information and what was required from myself to proceed. Holly Palmer who is one of the SFM Sales Support Executive was very prompt in responding to my emails and sending me anything that I needed to complete for the process and acknowledging anything that I returned. Tom Bailey who is one of the SFM Account Managers was very prompt at sending me the original quotes and adapting them to suit my needs and alongside Holly keeping me informed at every point during the start to end process. The whole process took at the most 3 weeks from quoting, ordering to the delivery/collection. although I appreciate this was a stock vehicle and not ordered purposely for my requirements. I had to go and collect the vehicle in the end as there were no available drivers to deliver for the date that I needed the vehicle, but this was not a fault of SFM, who tried their best to get the vehicle to me for the requested date, but had I not needed the vehicle to go on holiday then I would only have had to wait a couple more days for delivery. I would totally recommend SFM to my family and friends and hopefully I will be able to put people/business their way. When my lease is up I would not hesitate to use SFM again and hopefully this review will persuade others to take a leap of faith in SFM as they really do deliver the fantastic service that they advertise"

"Received my car this week and I cannot recommend this company enough!! They helped me find my perfect car and then helped every step of the way till it's delivery. Even after that they checked to see if I was happy. They went above and beyond and I have already been recommending them to my family and friends. Thanks to all the the team at Silverstone Fleet Management - car leasing in Northampton"